A month or two ago, I tried out using TeeSpring for a run of Echoing the Sound shirts. A number of people complained that the shirts weren't black. (A lot of other people really liked the silvery color that was chosen.) The Teespring campaign was successful, and the shirts were shipped about two weeks later. I was impressed enough by the quality of what I got that I decided to have another go at a NIN Hotline shirt. The first batch I did in 2000 was pretty simple. In 2007, I regrettably had shirts made through Faction - the shirts and the ink were fine, but the print was much smaller than I was expecting.

So I set about throwing some ideas together for a shirt that I wouldn't be embarrassed to wear (although you could say I have no shame anyway, but I digress) and I came up with this: 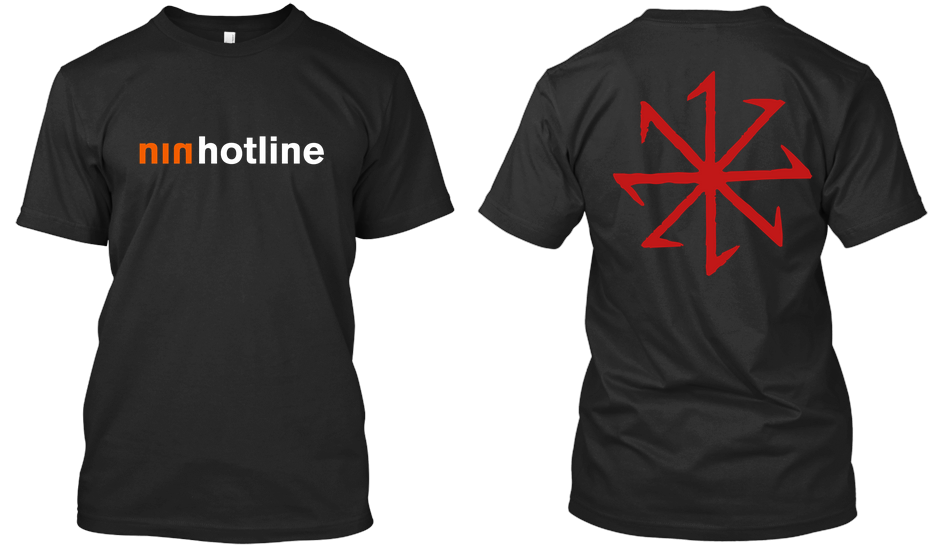 The front is very simple, "ninhotline" in Akzidenz-Grotesk bold in the style of broken and ninetynine, and the back is meticulously traced from a photograph I took of the back of the last-in-the-warehouse "gargoyle" shirts that were sold during the Dissonance performance/Outside Tour, oh, seventeen years ago. It's as big as I can get it, because I kind of miss the huge prints from TDS era shirts. Being that the design is from the mid-to-late nineties, where everything was distressed, I made sure to preserve all the nooks and crannies. I think it looks pretty great on a black shirt. Yes, my OCD gets kind of itchy that I'm mixing eras with my design, but people are only going to see one side at a time anyway, and if you don't like the back, wear a jacket over the shirt. Well, that or just don't pre-order it. No pressure.

The shirt itself will be an American Apparel shirt, because I've found them to be comfortable and decent quality. It's a little more expensive than the other options, but why use a crappy canvas?

If I did my math right and the shipping hasn't changed, the shirt will come out to $25 shipped, if you select standard shipping within the United States (edit: $24.97 shipped, SO CLOSE). Unfortunately, shipping outside the US is something like $10, but there's not a whole lot I can do about that.

These shirts are pre-order only. If you do not get your order in by September 1st, there is no overstock that you can buy from later. We effectively break the mold. Also, if fewer than 30 shirts are pre-ordered, then no money changes hands, and the shirts aren't made. In the ETS shirt run, one person's shirt had a printing error (a little dot of ink was missing in the 'e') and that's how I learned that you can't exchange it for another shirt, but you do get your money back.

Anyway, sorry for going meta for a little bit - now back to your regularly scheduled Nine Inch Nails news.