This photo just showed up on the internet. If you're reading this via RSS, first, sorry the feed was down again for the last few days, but now that's out of the way, what you're missing is a picture of a bunch of spines that say "hesitation marks" on the side.

In related news, signs very strongly point to the new single being "Everything" with a video being created by Shynola, due out in about a week and a half. The song was going to debut at Lollapalooza, but in a late decision, was scrapped from the set. 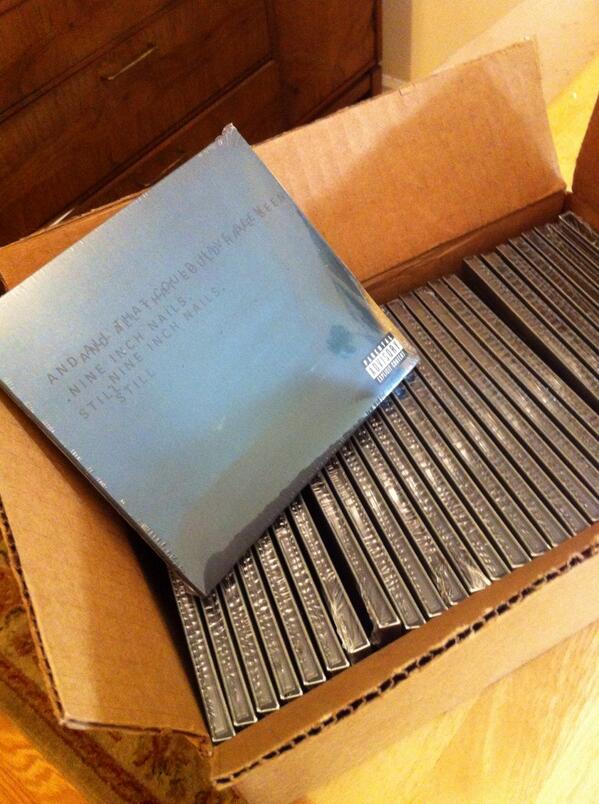 Is that picture of a bunch of NIN albums still getting you excited? Well, I reached out to the guy at Columbia Records who presumably could hook us up with stuff to give away, and... well, he basically ignored me. I was hoping to rescue some of those Came Back Haunted promo CDs from the types who just list them on eBay, maybe some of those awesome Hesitation Marks posters that went up in Chicago before Lollapalooza, but I learned a long time ago that record labels aren't really interested in working with us, and apparently that hasn't changed, so we're going to do our own thing. I'm lucky enough to be going to a few shows on the upcoming tour, and I'll be taking a box of still-sealed copies of And All That Could Have Been: Still with me (finagled from an unpaid storage container. seriously!), and I'll be hiding them (and maybe some other sweet NIN swag) in places that I'll tweet about from our Twitter account (I mean, why tweet from anywhere else?).

Scala tickets they ain't, but I make do with what I've got.