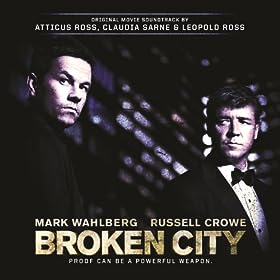 While you weren't looking, Allen Hughes directed a movie called Broken City, and he was clearly pretty happy with the soundtrack for his film The Book of Eli, because he brought on Atticus Ross, Claudia Sarne, and Leopold Ross to do the soundtrack for Broken City. The score was released January 15th, and is available on Amazon and on iTunes.

A couple of the tracks also feature Kirk Hellie, who's previously worked with Atticus & Claudia on the unreleased 12 Rounds album, which totally exists, because 12rounds.net has MP3 downloads of three tracks from the album, and c'mon guys release it already because it sounds awesome.

Atticus created an Rdio playlist of songs that inspired the soundtrack, which you can read about and listen to at Indiewire. The playlist includes a few tracks from the new score, if you'd like to try before you buy.