Two decades ago, Nine Inch Nails followed The Downward Spiral with an ambitious work of art. The first single had no drums, the photography around the release abstract, and the famous NIN logo appeared cut in half on the album cover. Below are David Carson's original visuals for La Mer, The Great Below, and The Way Out Is Through, some of which were used for Nine Inch Nails' "Fragility" tour through Europe.

If you can't find a Fragility guitar, make one yourself 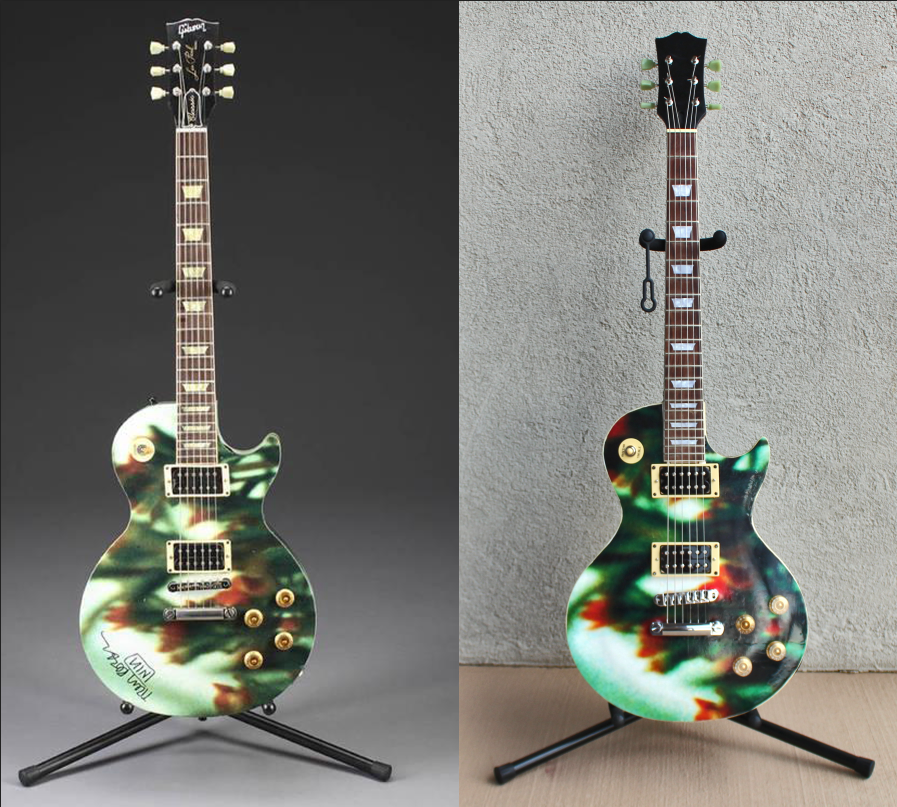 A while ago, when Monoprice started selling $100 Les Paul knockoffs, I briefly considered putting several hundred dollars on an order of several of them, and then getting wraps made at any of a number of available guitar decal companies online, and turning them around for a profit on eBay - not being misleading about their origins, but also figuring I could easily double my buying price.

I'm not especially good at this capitalism thing though, because the whole thing felt kind of dirty, even though all I really wanted was to profit enough to cover the costs of my own knock-off Fragility guitar.

Over on Reddit, user N1I2N3, aka Liam O'Brien, felt this same struggle. Unable to locate an original Fragility guitar, or even high quality photos of them (Liam, I could have helped you out buddy), he set forth to build his own replica.

As in from scratch.

In this imgur gallery, Liam documented everything from the chainsaw cutting through an elm tree to the CNC machines shaping the slab into a body, a few false starts and lessons learned, all the way through to the finished product.

For as much as the original guitars go for these days, he might still have come out ahead in terms of dollars spent. Liam does not yet know how to play guitar, so we don't know how it sounds either, but it sure does look nice, and I bet it's got some heft to it, too.

Alternative Press does a 30 year retrospective on NIN

Normally I don't care for listicles - and this is a listicle, there's no doubt about that - but it gets a pass because it's written by Jason Pettigrew, who's been covering Nine Inch Nails a lot longer than we have. As with any of these, there's nothing new to read, but Pettigrew offers his perspective on the arc of Trent's career so far.
When it looked like every dude with bigger external hard drives and terrible haircuts was biting his moves, he pushed himself further, ending up—with creative foil Atticus Ross—as a go-to team to raise the bar for Hollywood soundtracks.
Read the full article for more of Jason's well-informed quips.

Bad Witch vinyl for $11 on Amazon

At the time of this post, Bad Witch is available for $10.98 shipped if you're in the US.