After what we presume were unexpected production delays, the physical component for the digital release of Not The Actual Events began shipping late last week, and as of this morning, we've seen reports of people receiving theirs in the US and in the EU.

Some people received email notification of the shipment - with tracking numbers, no less! Other people did not. Check your spam folder, and/or log into store.nin.com to view your order status there.

I'm not going to post any spoilers yet, but please share your photos with us - upload them to an Imgur album and either tweet the URL to @ninhotline, or submit it via our form... the latter option, I'm not entirely sure is working as I type this.

I think the content management system sputtered back to life

Watch this space? Not everything fits into 140 characters.

Hi. I'm mostly posting this to make sure my credentials still work and if so, yay! NIN shared a remix for Todd Rundgren's "Deaf Ears" last week and, I have to say, it's pretty lit.

Before the Flood LP release in stores April 21st

Though we were treated to the digital release of the score to Before the Flood months ago, Lakeshore Records has recently announced that the LP we all pre-ordered will be in stores April 21st, 2017, the day before Earth Day.

Over on the Instagram accounts for Invada Records and Lakeshore Records, they've been sharing some behind the scenes shots, such as test pressings (click on the our locally hosted image to grab the higher resolution copy), as well as dropping hints about how production's been going, and when stuff's coming out. They do some cool stuff with other artists you'd probably dig if you like the scores Trent & Atticus put out, and have pressed some really creative looking vinyl - check 'em out.

It was revealed yesterday in an email to nin.com vinyl customers that new music from Nine Inch Nails “will be released before the first shows we do this summer”. The email also stated that the EP “Not The Actual Events”, released in December 2016, is the first of a trilogy of EPs to be released “6-8 months apart”. The email ends by saying there will be “more information on this shortly” and is signed simply “Trent”.

Nine Inch Nails has announced that the EP, Add Violence, will be released on July 21st. The band also dropped a video for the song, “Less Than”.


For information on Add Violence including track list and pre orders, head over to nin.com.

Nine Inch Nails posted to twitter and facebook that the band will appear for a Q&A session at Chicago record store Reckless Records tonight at 6pm.

The first 50 people to arrive will receive a copy of the Vietnam War Original Score 3xLP set, signed by Trent Reznor and Atticus Ross. This is the first place in the world that you can get this album.

Space is limited but the event will be broadcasted live on Facebook at 6pm (central time) . 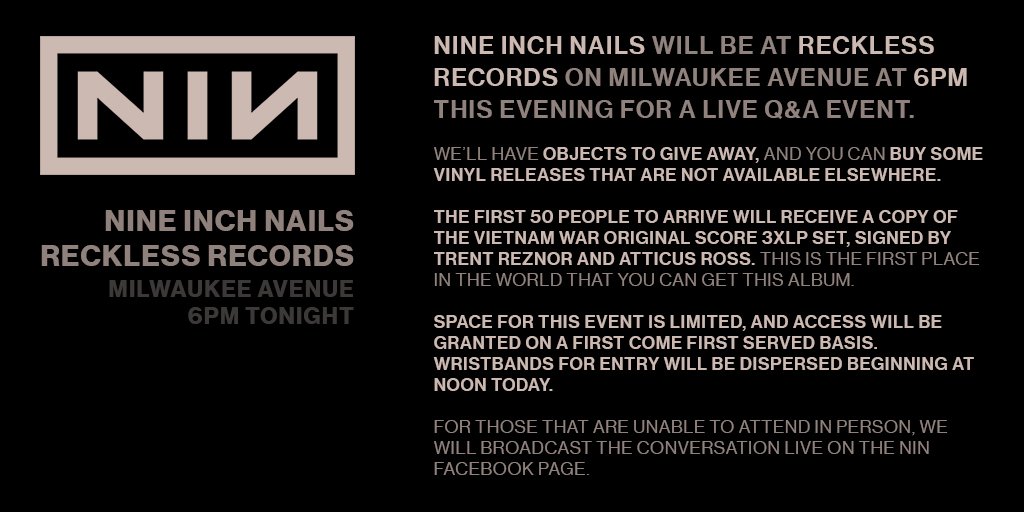