How To Destroy Angels site updates.

HTDA has updated their blog the past few days with studio pics. No news of any release dates or anything other postings.


The Daphne Carr Book that Leviathant posted about last week has a "semi-official" limited edition release through a book binder for sale on Etsy.

From the product description:
This project was created by the professional bookbinder and letterpress operator Davin Kuntze, of Woodside Press, in consultation with book’s author, Daphne Carr. It is their collaborative work to celebrate the spirit of the band itself, which has continually sought to engage, challenge, and usurp the commodity form with brilliantly crafted albums, singles, and boxed sets.

The edition will consist of 200 hand bound books. Numbers 1-30 are for friends and family, 31-75 will be issued through face to face exchange at events surrounding the April 2011 launch of the book. Numbers 76-200 are available through this shop. I will post numbers as they are ordered, and ask that you give two pieces of information upon ordering: your top 5 most desired numbers, and the exact name you would like the book dedicated to.

There's also an option to personalize these copies.

Thanks to Third Uncle for sending this in.

I know I've been posting about the imminent release of this book for a few years. Hell, if you search Google for Daphne Carr, the third result points to us. Nonetheless, today it's official: the latest book in the 33 1/3 series, about Pretty Hate Machine is released today. I'm still waiting on my copy, so I can't actually tell you much about it, but when I do get my copy, we'll be giving away a few copies of the book, because giving stuff away is fun.

You can listen to a short 30 second sample of Robbie Robertson's 'Madame X' which credits Trent Reznor with "additional textures''here.
Thanks to Botley for the submission.

While I was out recruiting some fresh faces for the site, Trent Reznor spoke to All Things Considered, but that was after Austin Scaggs talked with him about Lollapalooza, Oscars and touring. Somewhere in between that, Artist Direct wrote a love letter to Nine Inch Nails, and had Korn, Sasha Grey, Zack Snyder and Godsmack cosign. On top of all that, several folks wrote in to alert us that Daphne Carr's enigmatic Pretty Hate Machine book began shipping this week - we're going to have a review of that not long after our copy gets here, and we'll be giving out a few copies once I come up with some hoops for you to jump through.

When The Downward Spiral was given the Deluxe Edition treatment for its tenth birthday, I did a little write-up explaining some of the differences between the audio on the 1994 CD and on the 2004 CD. When I learned that Pretty Hate Machine was also getting the remaster treatment, I thought it might be cool to do something like that again. For one reason or another, I didn't get around to it though.

Enter longtime Hotline pal and sound designer/engineer Botley, who reached out last week about doing exactly the kind of thing I was thinking of doing, but doing it much better than I think I would have been able to pull off. Read his in-depth analysis of the Pretty Hate Machine remaster here - it gets kind of technical, but hopefully you dig that sort of thing. From filtering to limiting to pre-gaps and crossfades, he pretty much covers all the bases.

Signed NIN keyboard up for auction

A keyboard donated by Trent Reznor is soon to be auctioned by Wax Trax! The keyboard in question is a Novation 25 SL keyboard which was used on the Wave Goodbye tour and has been signed by Trent as well as Robin Finck, Justin Medal-Johnsen and Ilan Rubin. The starting bid is $200, to find out more information about the auction and how to bid visit this page. 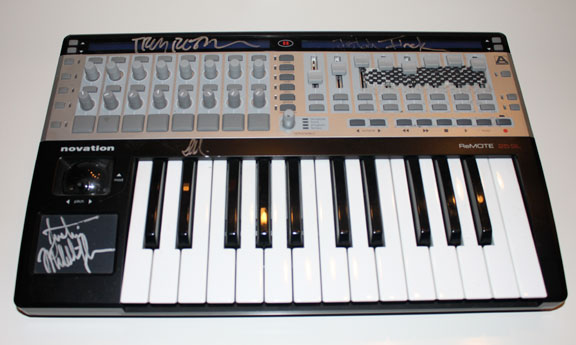 Thanks to SwimFin for sharing this on the nin.com forum.

Send a quick email on behalf of our buddy Alessandro

Former NIN synthgeek/backup singer/multi-instrumentalist/nice guy Alessandro Cortini is one of two artists eligible for a $5,000 grant from Topspin, who handled distribution of his solo project, SONOIO. If you'd like to give him a quick hand, email grant@topspinmedia.com with SONOIO as the subject. Want to actually think for yourself before doing as I command? read about the process here. They've got details on Alessandro's entry on this page. Topspin is accepting entries until noon (central time) tomorrow. For the record: I don't care how much you like (or don't like) SONOIO and Alessandro, please be honest with your email-votes. Thanks!

Some NIN news that is actually about Nine Inch Nails

As you are aware, Trent Reznor has been quite busy lately, making Fincher-adjacent soundtracks, winning several prestigeous awards, and appearing on other people's albums. It has recently come to light that he has also been doing some Nine Inch Nails.

Firstly, a recent tweet reveals that the 5.1 mix of The Fragile is currently under way: And secondly a nin.com forum post reveals that the team are "still fully engaged with the Year Zero mini-series, writing away." Exciting times!


Remember that you can get the most important announcements straight from the horse's mouth on twitter. At the very least, it will prevent Google from mistaking us for a content farm.

It's been four years since ninwiki launched during the Year Zero ARG. It began as a way to keep track of all the craziness and since then it has grown into all-encompassing source for any information related to Nine Inch Nails. There are articles for tours, albums, band members, and plenty of interesting facts.

Ninwiki has been given a fresh look to fit in better with the family of Nine Inch Nails-related sites, as well as a redesigned main page to give visitors quicker access to the information they are looking for.

So if you haven't seen it already, head over and check it out.

If you have any questions, comments, concerns, Let us know what you think.

Merch dump from Wave Goodbye available at our store

If you head over to The NIN Hotline store, we just got a whole pile of goodies from the Wave Goodbye and NINJA tours, including the Wave Goodbye club tour itinerary shirt pictured here for $13.99. Which is cheaper than you're ever going to see it go for ever again.

There's also a disproportionate number of women's shirts in this batch, which if you're a woman, you know is pretty unusual. Rather than clutter up this page with more cut-down images though, I'm going to suggest you just visit the storefront and check it all out there. Here's the run-down of newly added stuff: