After originally being slated for release the month of June, Amazon has thrown up a page for Modwheelmood's Pearls to Pigs, Vol. 3, where you can check out some previews for the latest five songs (clicky here).

What's curious is that they've also listed a release date of July 17th for the EP. Normally, new music, DVDs, etc. are released on a Tuesday and the 17th is a Thursday and I know this because I'm seeing The Dark Knight at midnight that day (dork). Basically, there is the possibility that this could change. We'll let you know if anything happens between now and then.

Nine Inch Nails has just released the fourth in a series of live rehearsal videos, this time for the song "Ham 'N Eggs". I'm assuming it's another song from The Slip (I haven't actually gotten around to listening to it yet). Anyway, it's pretty cool. Not sure why they went with YouTube this time, but Trent always knows what he's doing.

Check out the video here.

The first wave of South American shows have been announced over at nin.com - and they're not festivals!

Long before NIN.com's remix site opened, and shortly after the first NIN multitracks became available, a couple guys decided to launch a site solely for hosting fan remixes of NIN tunes. It was aptly named "NIN Remixes". Now, it seems this site needs your help. I received the following email this afternoon:

"Due to lack of donations over the past year, it appears that ninremixes.com may be unable to continue. Since the inception of the site, we have run it purely off donations, which has kept the site free of advertising, membership fees, and the likes, and has provided the necessary bandwidth and storage to host this massive project which continues to be active and growing. If you would like to see this site continue, we urge you at this time to donate. Any amount helps. If 240 people out of the over 3000 this is being sent to, were able to donate $1.00 (USD), we'll be set for another year. Thank you everyone for your support, and all the great media you've brought to the table."

So if you can spare that extra dollar (or few), lets help keep this site alive.

Oh, and ETS is back up now, just in case you missed us.

Echoing The Sound is down

The ISP that hosts the echoingthesound.org domain is down, and the only people that can fix it are the ISP people. In the meantime, go do something besides spam F5.

Check it out at Pitchfork TV. It's the most fun you'll have on your computer all week, I promise.

Live From Rehearsals: Letting You

Letting You is now up at Pitchfork TV's website and, once again, in "decent resolution & stereo sound" (copyright 2008 Leviathant Inc.). It rules, but I'm sure I won't have to tell any of you guys that. Check it out!

NIN, along with Stone Temple Pilots and The Flaming Lips will be playing the Motorokr Fest in Mexico City on October 18, 2008, says this site (Information is all in Spanish)

In an exclusive on Pitchfork TV, you can watch the full rehearsal performance of 1,000,000 by the touring lineup of Nine Inch Nails - check it out here in pretty decent resolution & stereo sound. Presumably, this is one of the tracks on the DVD bundled with the physical release of The Slip.

Jofinin made a post on ETS about super shitty Kerrang! Magazine opening up the votes for this year's awards. If history is anything to go by, the NIN community sure loves to vote with an unhealthy obsession, so for all you clickers, here are the details:


I am not sure of you're aware, but the Kerrang Awards 2008 website is now live, and like the 100 Best Rock Bands thing earlier this year, it involves typing the band/album/song and clicking vote lots of times.

Looking at the result of the latter, thanks mainly to ETS (I hear we crashed the servers or something], I was thinking, if we can vote NIN the way we did with 100 Best Rock Bands, we can get them into the nominations at least, then who knows? Maybe then we could vote the shit out of the nominations?

The link to the main page is here, you need to register for some reason, and then click the following categories and type:


Then when done, click the hell out of the vote button, and then we shall see the results roll in.

Amazon pre-orders are up for The Slip

Over at Amazon, you can pre-order the physical release of the Slip as a numbered, limited edition CD/DVD digipak or 12" gatefold vinyl - which is not limited. Currently Amazon has both items priced at $24.98, with the LP on sale for $23.73, but these prices inevitably change as we get closer to the US release date of July 22. If you pre-order on Amazon, the price you pay will be the price it's set to on the release date.

**UPDATE: As of 3pm ET Thursday, the CD/DVD price has dropped to $19.99. If you already pre-ordered, don't worry - Amazon does not charge you until the product ships.**

And UK readers can pre-order at the following stores:
play.com
HMV: cd/dvd, vinyl

In other news, I know our news submission form is broken, our hosting company randomly changed up how they handle SMTP mail, but I haven't had time to fix it because I'm behind on about three other web projects at the moment (sorry Cliff! Tomorrow for sure! Again!) but I'll have it back online by the weekend.

Nine Inch Nails fans all over the internet have been mourning the loss of Rich Fownes, who was a proud member of the band for about eight minutes before being replaced by Sideshow Bob of The Simpsons fame. Why was he taken from us before we got the chance to bitch that Jeordie was way better? More than anything, the fans just want answers. Well, sorry, I don't have any, but I'm pretty good at making shit up!

In lieu of an actual worthwhile Meathead Perspective update, the wallpapers section has been updated with a hot new Discipline wallpaper that some of you apparently wanted. You know, in case your poor iPhone has been feeling neglected.

Also, I'm shilling a new painting I made that's based on the Discipline cartoon. Here's the link to the auction! Be sure to place your bid soon, so some other asshole doesn't get it.

The Slip will be available in an individually numbered 2 disc, 6 panel digipak & double gatefold vinyl in the US, Canada, and parts of Japan.

The digi will be LIMITED to 200,000 pieces only, each individually numbered, and will include a DVD of NIN performing live tracks from The Slip at rehearsals, a 24-page booklet, and an exclusive sticker pack.

For UK, Europe, Australia, and other territories, the release will not be limited or numbered, but will otherwise be identical.

The gatefold vinyl release contains 1 LP (180 gram vinyl) and a 24-page booklet (vinyl is not limited or numbered anywhere).

The Slip will remain free for download indefinitely from theslip.nin.com.


Keep an eye on nin.com for more info

Let the hunt begin for the many variations of NiggyTardust! First out is the iTunes version (which can be located here). Available is a 128kbps AAC DRM-protected (?!!!!) version for $9.99. What you get is the entire album that was available last Fall along with five bonus tracks... but really, three of them are new songs - "Pedagogue of Young Gods" (which is No One Ever Does with different lyrics), "World on Wheels" and "Can't Hide Love" (an Earth Wind & Fire cover). The other two songs, "Gunshots by Computer" (Hyperpower remix) and "List of Demands" (used in a Nike commercial) are an added bonus.

The CD & Vinyl release of the album will be hitting stores July 8th and will feature more bonus songs. Details are being discussed on ETS here.

Also, Saul's website has received a major overhaul along with the return of their forums, which are located here. They're a little barren right now so head on over to discuss poetry, music, film, literature, spirituality, health/diet, relationships/love, parenting, politics, humor, art, Saul's upcoming shows, Saul in the Classroom (awesome), etc.

Thanks to everyone who wrote in with details!

The first interview done since the release of The Slip is up at the New York Times. It's called Frustration and Fury: Take It. It's Free

You may need to register to view it but at the moment it's viewable without registering. Definitely worth reading!

For those with long memories and even longer grudges...

Do you remember back in 2003, when an unscrupulous dog of an Ebay seller somehow got ahold of a 2 hour VHS featuring behind the scenes footage of the making of the Closer video (from a different source that was featured on the 'Appendage' extras on the Closure leak), saw $$$ signs in their eyes and then got cold feet and ran away never to be heard from again, robbing us all of some prime collectors material?


Well after much hard work, this footage has now been wrestled back from the touts and has been delivered into the hands of legitimate NIN collectors, where it belonged in the first place, except this time in nearly 5 hour dvd form and is now available totally free of charge!


See this thread at ETS for more details!


And please...If you see this for sale in any shape or form, please contact either myself or one of the other mods/admin at ETS or right here, and it will be dealt with...Harshly. Big thanks to all involved. 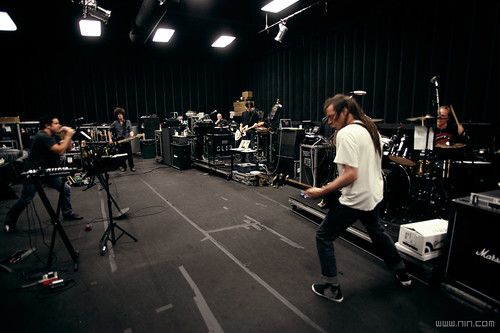 And there's more! A Free Tour sampler is available at lightsinthesky.nin.com/


Are you excited? I damn well am!

Regenmag.com broke an interesting story about Pigface's latest digital remix album, 17 Ways to Suck, which features... wait for it... remixes and cover versions of the song Suck.

The article says that it's available now at the Invisible Records web store but I wasn't able to find it anywhere on there, so it might be showing up soon. In the meantime (and this is how sheltered I was as a child), you can check out the original version of the song that I've never heard before at Pigface's MySpace page.

Thanks to Nicole for the head's up!

*Edit* Tom VX is better at the internet than I am. Travel here to check out the remix album. Thanks!

For all you NIN fans in Portugal, you now have your very own locally based forum!


Thanks to Jo for writing in and letting us know

Alessandro and Pelle updated their MySpace page and added a new song, "Lie" to their music player. It's awesome. The guys also updated their blog with an announcement that Pearls to Pigs, Vol. 3 has been delayed. We're not sure what caused the delay and if it's still going to come out this month since a timeframe wasn't given, but we'll let you know what the details are when they've been announced.

Mixing and the addition of a new song have caused the delay. We'll let you all know when the release date has been announced.